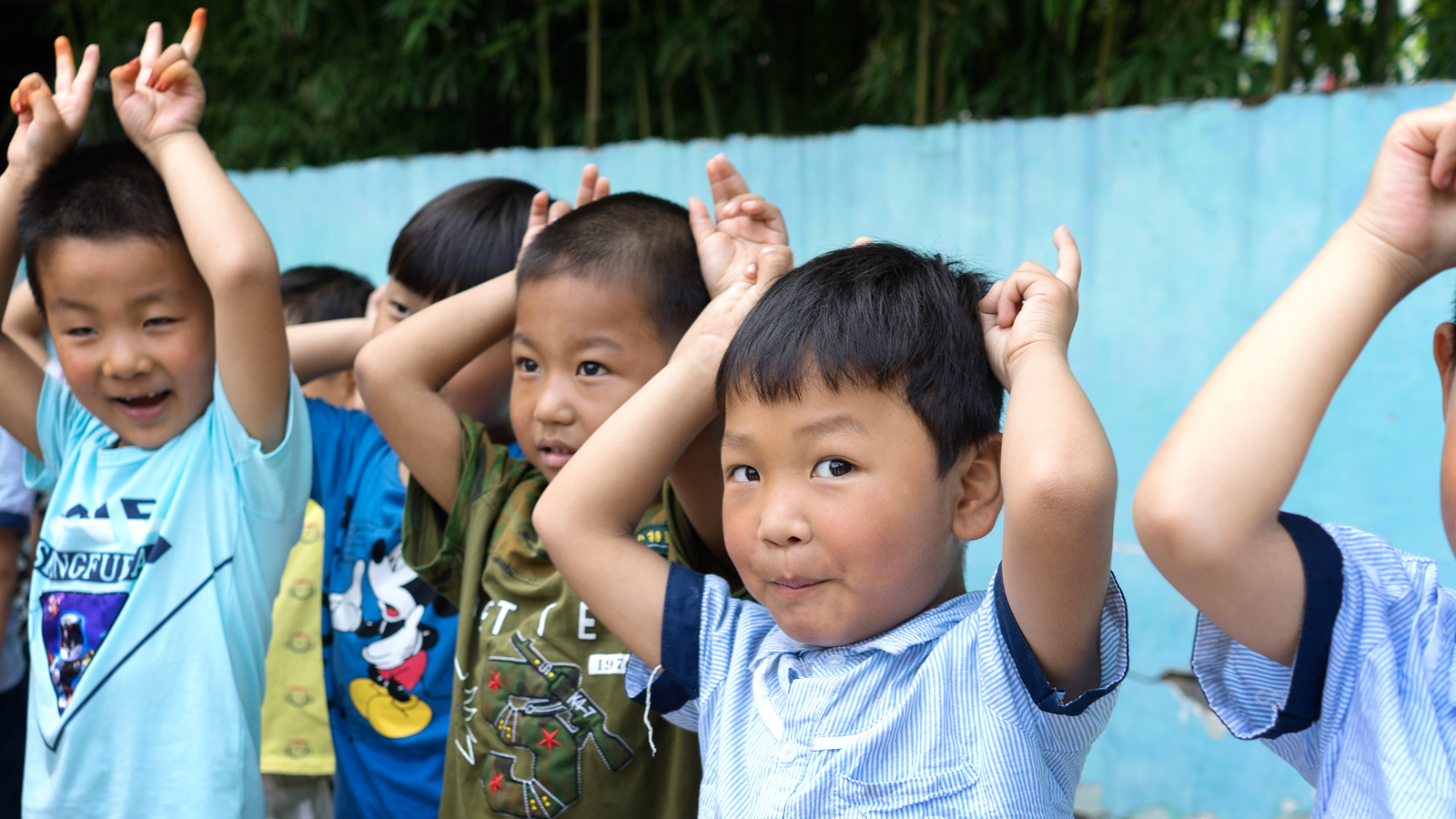 Xiaoming is a 5-year-old boy who is short for his age.

When Xiaoming first joined OneSky’s preschool, he was timid: while the other children in class talked and laughed, he sat alone quietly and was often sleepy, no doubt because he already had adult responsibilities on his thin shoulders. 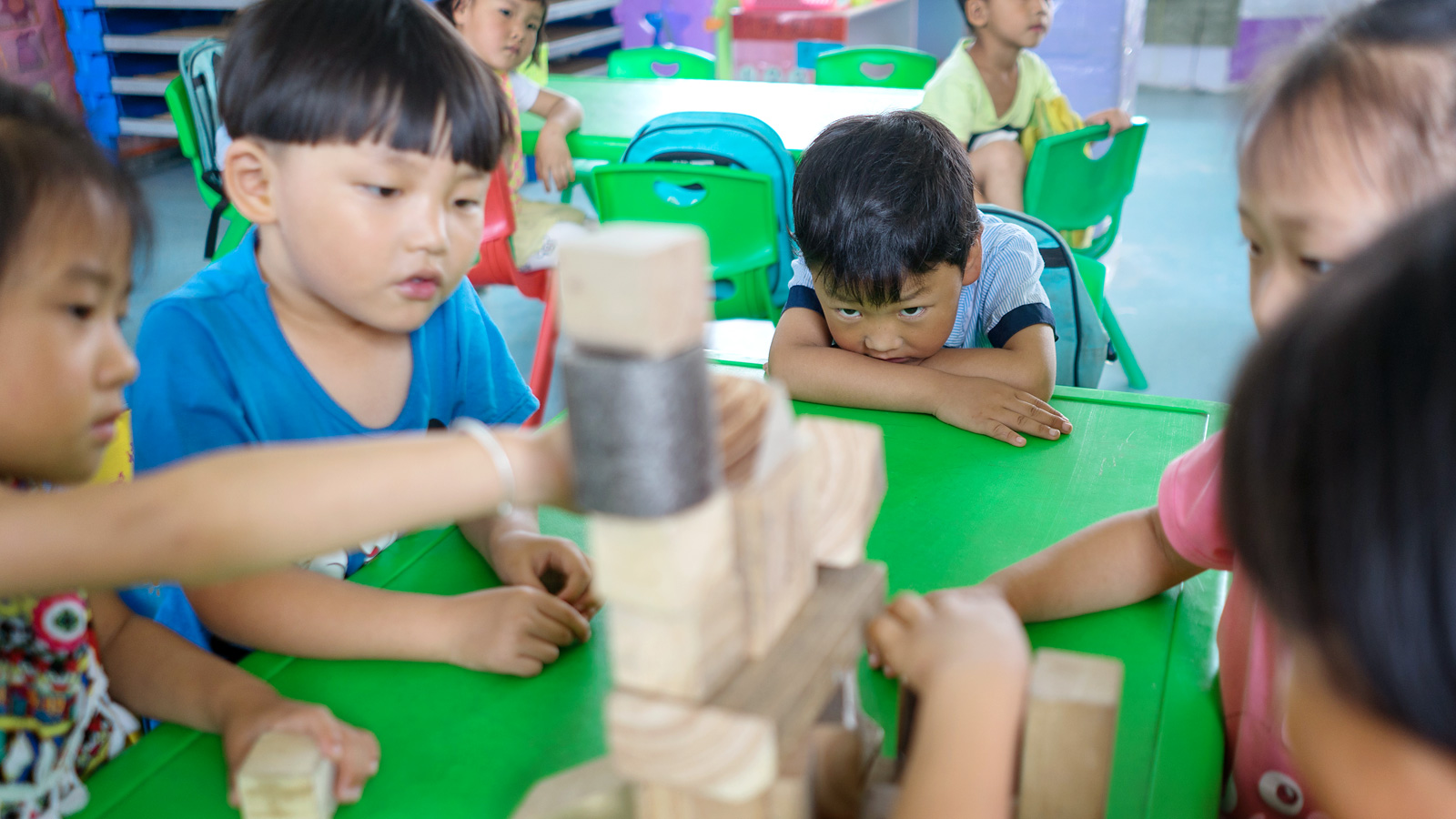 Since he was a baby, Xiaoming has been taken care of by his grandmother Wang Fen, who stepped in after his mother abandoned the family because of their poor financial situation. Xiaoming’s dad Li Dahai is rarely at home because he has to work outside the village to support the family, just as his father, who died of tuberculosis 18 years ago, did.

Sadly, Wang Fen has suffered from serious rheumatic disease for almost three decades—her limbs are completely deformed and it is very difficult for her to walk and get dressed and undressed. Her rheumatic disease has also resulted in other chronic conditions that cost several thousand RMB a month to treat. 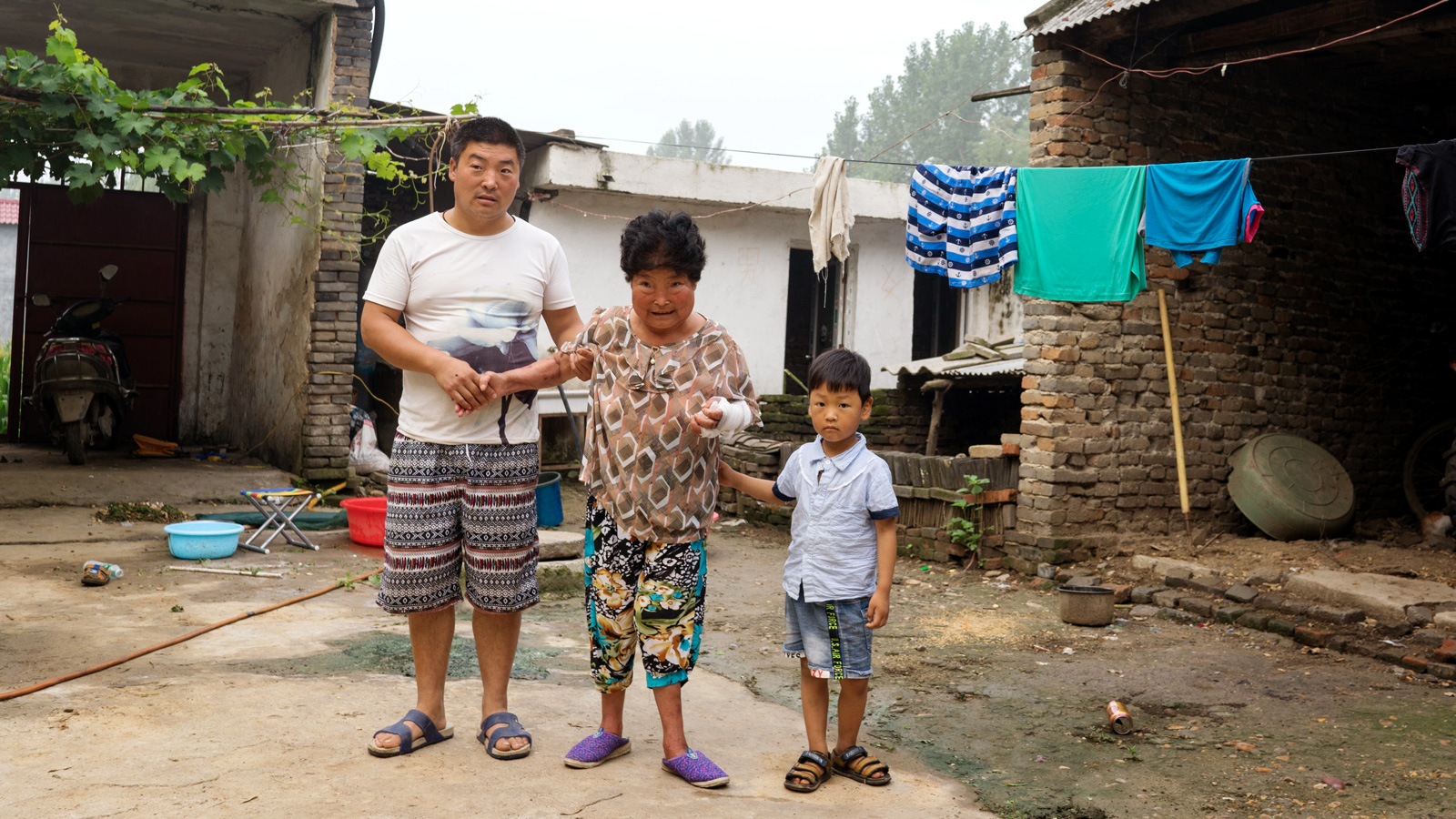 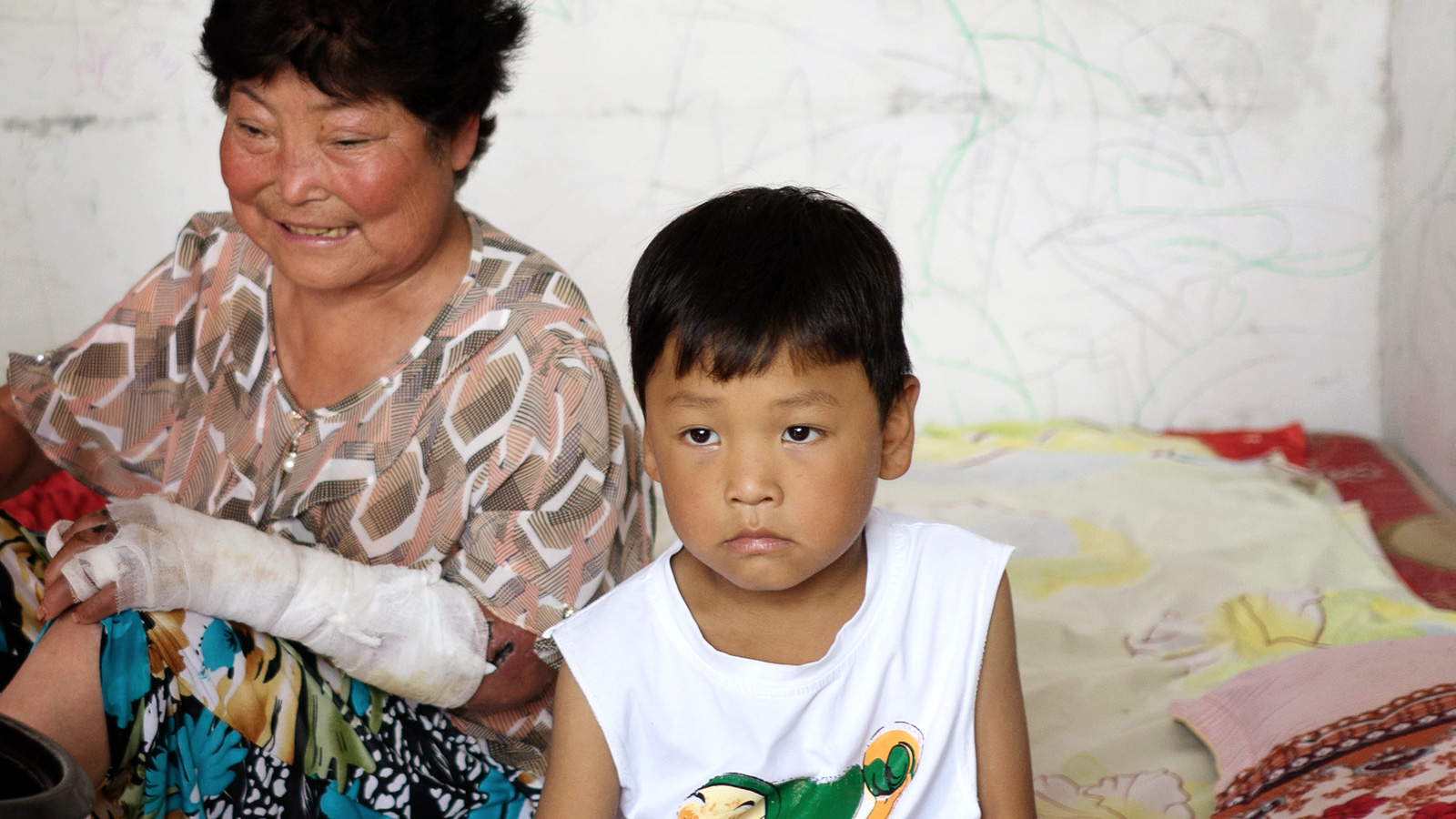 At first Wang Fen planned to raise some chicken and ducks to help support the family, but her worsening health meant that she could not get out of bed let alone raise chicken and ducks. Still, she tries to make breakfast and dinner for Xiaoming every day, though recently she had to spend a week in the hospital after she cut her hand accidentally and developed a dangerous infection.

Despite his small stature and young age, Xiaoming volunteered to step in for his grandmother just as she stepped in when his mother left. Xiaoming feeds the chickens and ducks each day after school, helps his grandmother take her medicine, get dressed and undressed, and he also empties her bed pan. Xiaoming’s constant refrain to his grandmother is, “Grandma, please relax. I will take care of you.” 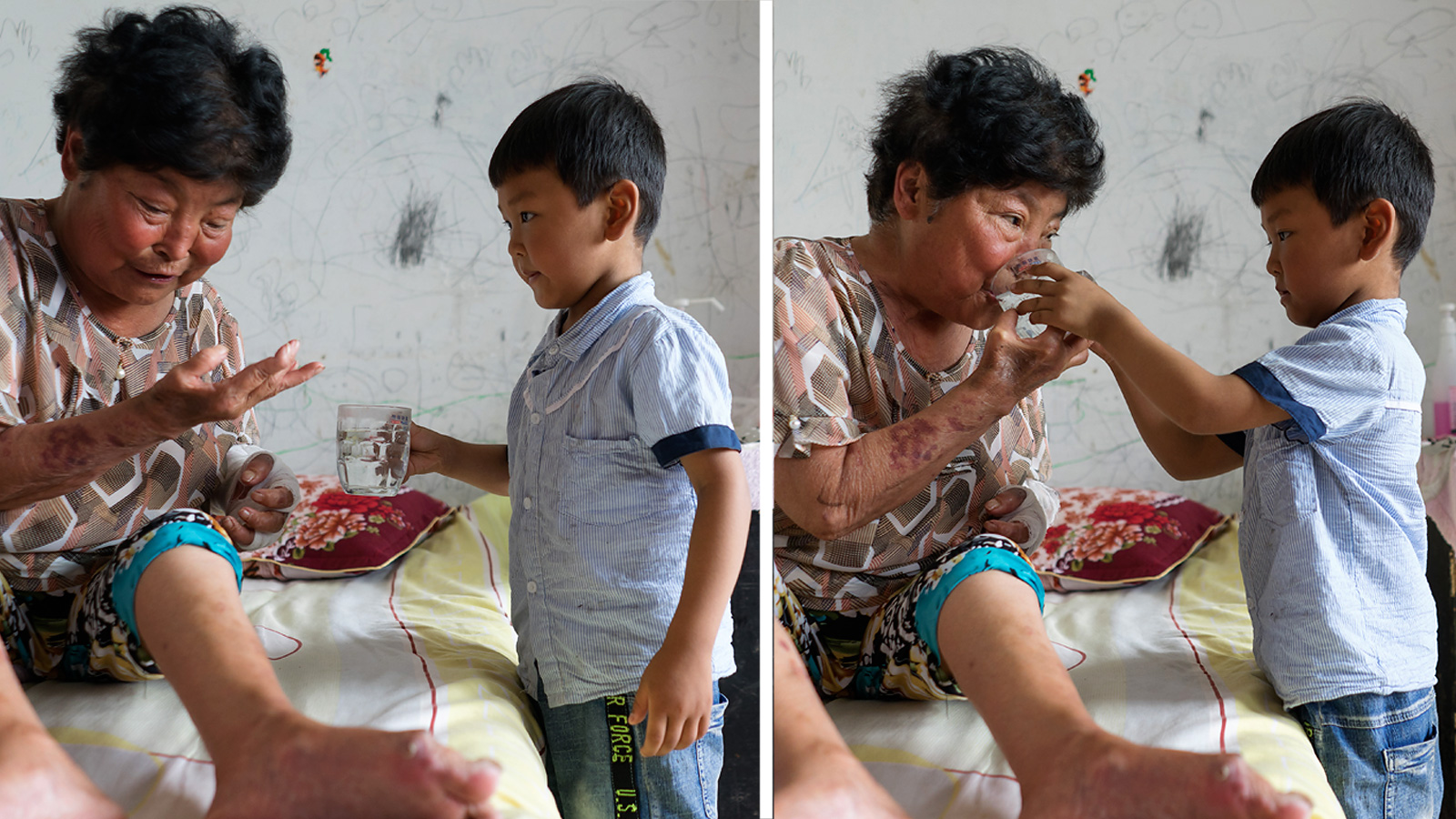 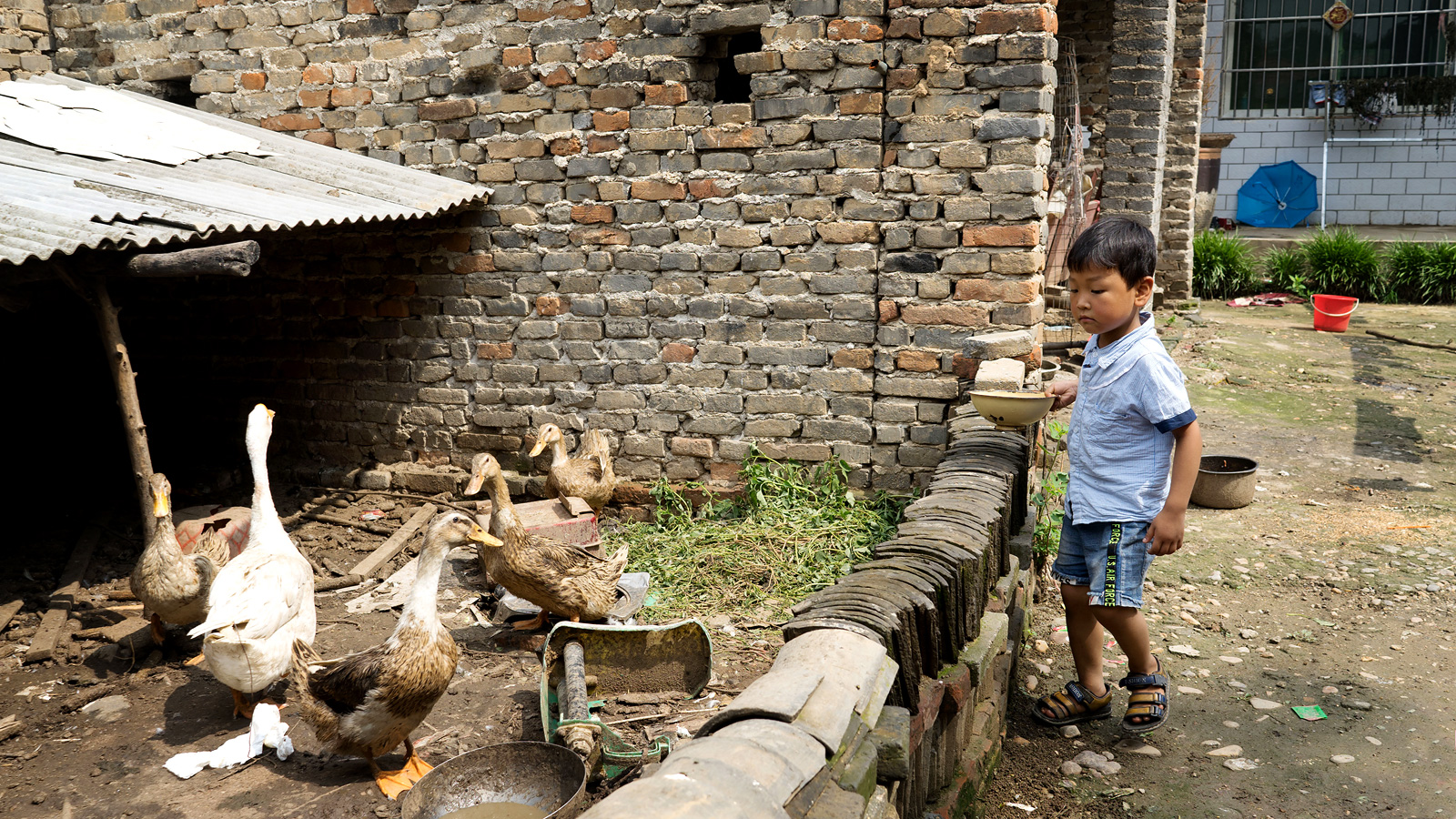 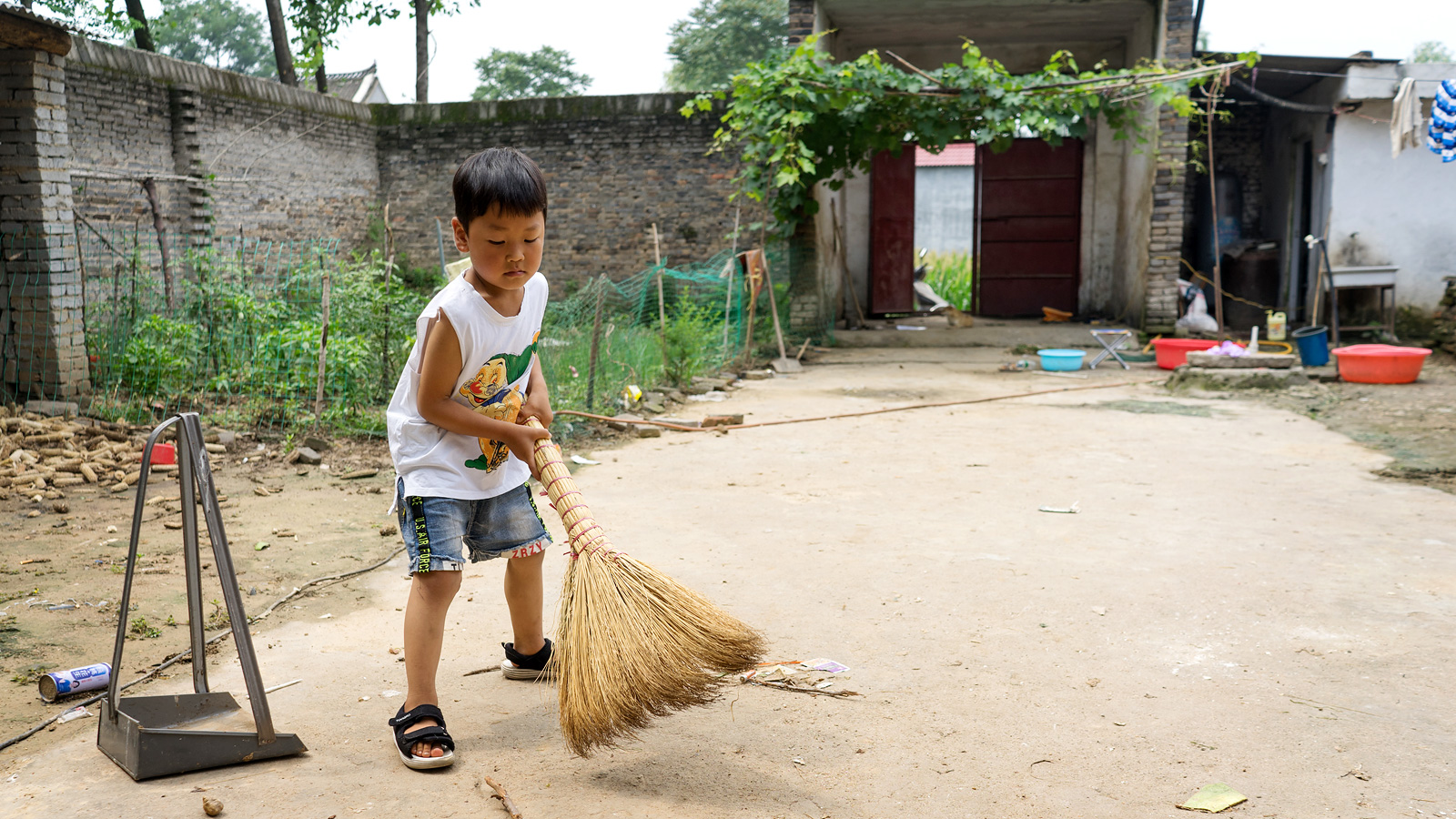 Sometimes Wang Fen’s elder son’s wife helps by giving the family food and washing their clothes, but she recently had major surgery and is still recuperating. In addition, her family’s financial condition is also not good and she has to take care of her own family first. Unsurprisingly, with a sick grandmother and a little boy doing the best he can, the rooms are dirty and messy and the courtyard is messy as well.

Though his daily life is challenging at home, at school, Xiaoming is faring extremely well. After observing Xiaoming’s situation for a period of time and learning about his family issues, his teacher Cao Yan came up with a plan she hoped would result in his becoming as lively as the other children. First she made sure to play and talk with him often. Then gradually, she guided him to express his ideas and encouraged him to play with other children. The big breakthrough came when Cao Yan learned that Xiaoming loves to paint and is good at it. After learning about his love of painting, she often praised him and encouraged him to draw freely. 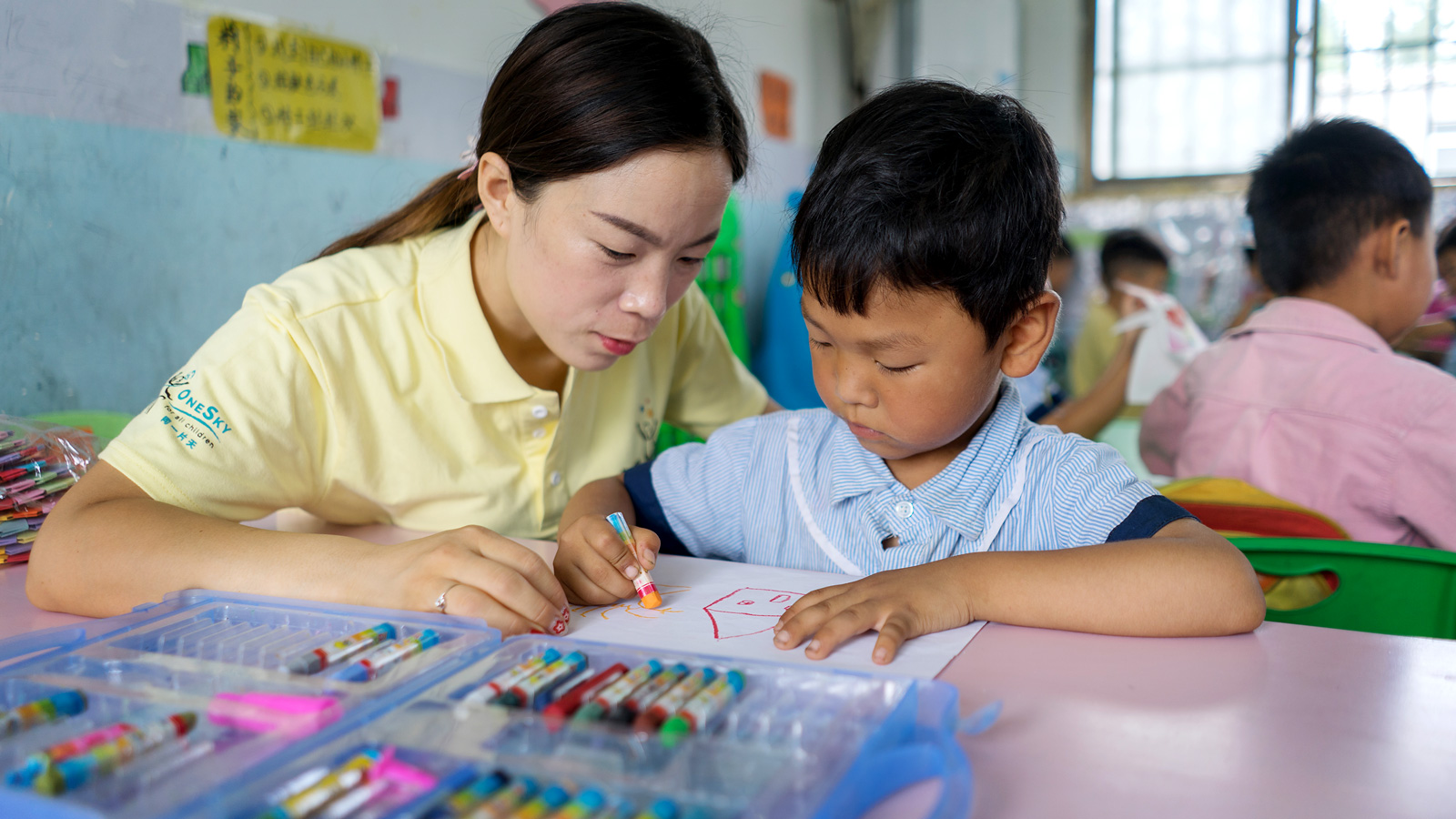 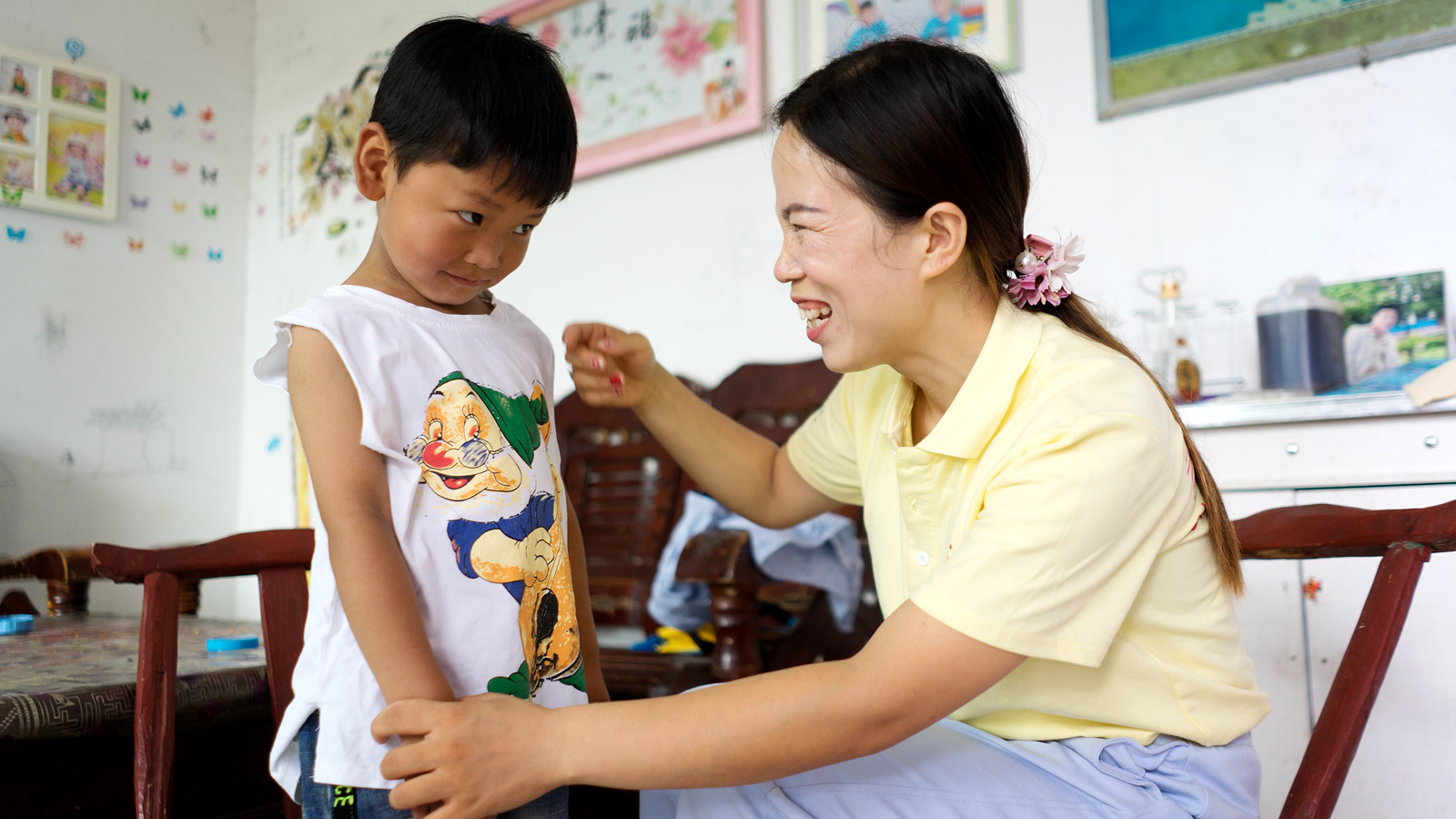 All of the teachers at the OneSky preschool pay special attention to Xiaoming as well. After seeing that his school bag was quite old, they gave him a new bag and new pencils and notebooks. They also gave him shoes and clothes that their children had outgrown. The teachers thought these gifts were just trivial things, but Wang Fen did not: “I am so grateful to my grandson’s teachers, who brought things to my home again and again even though it is not their duty. My grandson is very lucky to have such good teachers, who care about him more than his own mother.”

Thanks to the individualized attention he received from teachers who care about him, Xiaoming gradually became more talkative and started to socialize with other children and play games with them. When he encountered difficulties, he asked the teachers for help and took the initiative to express his wishes. 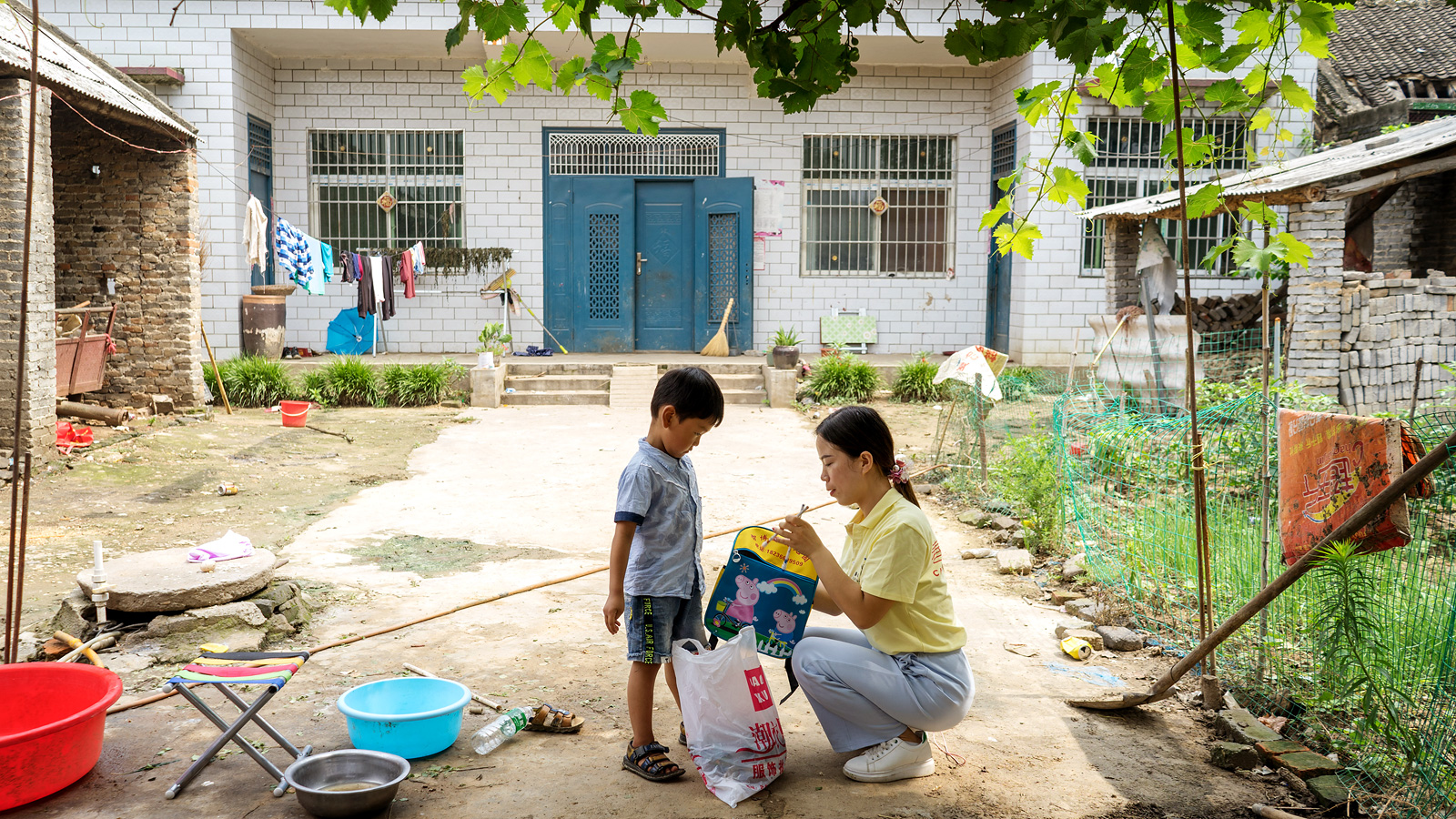 Though he is still only able to come home a few days during busy farming seasons, Li Dahai makes sure to tell his son how impressed he is with his progress at school and faithfully escorts him to and from school every day he’s home. Like Wang Fen, he also takes every opportunity to thank Xiaoming’s teachers, though his regret about not being able to spend more time with his son also means he can’t help reiterating his plea for them to continue to try to make up for his absence. “I cannot be home for him. Please pay attention to my son as much as possible.” 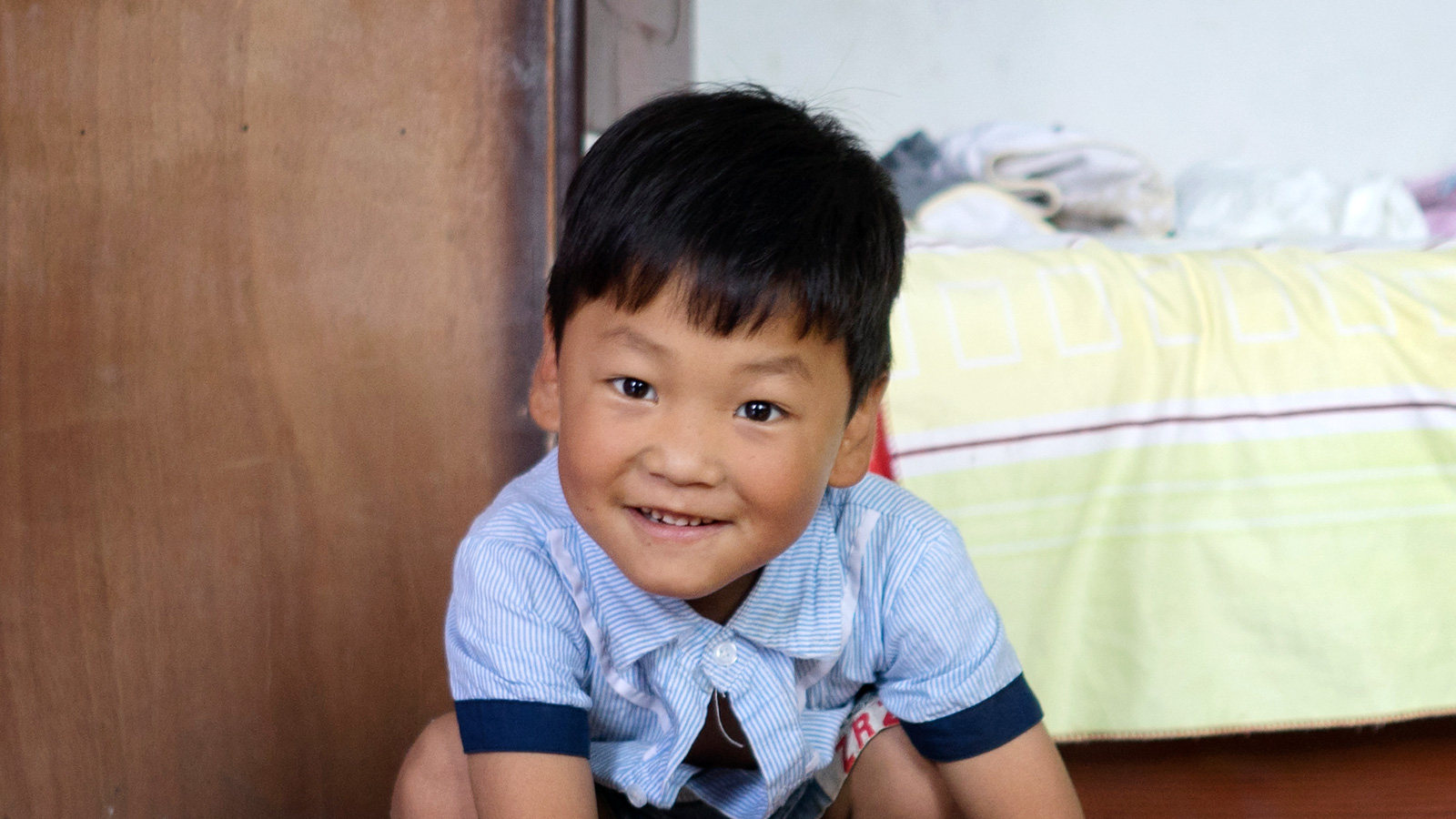 Kids hop, step and jump ahead